Harry Beanham is an Australian motorcycling enigma and his story has been told in Jim Scaysbrook's excellent bi-monthly publication "Old Bike Australasia" by Peter Smith in issue no.7, April-June 2008 together with others in the Beanham family, for there was more than Harry in the motorcycle trade.
Harry's brother Robert started Modak Motorcycles in Elizabeth Street, Melbourne, Victoria in 1930 and his son David Beanham continues it today with assistance from his mother Jean.
On Harry's death there were numerous auctions of the enormous amounts of tools, machinery, motorcycle miscellania and motorcycles from his estate and from these auctions, Harry's photographs, photograph albums etc passed in interested peoples hands, myself included.
The Vintagent , Paul d'Orleans, on his blogsite has offered two blogs on Harry and his ABC motorcycles.
I attended the auction spoken of by Howard Burrows who contributed one of the stories of Harry's ABC's on Paul's site.
http://thevintagent.blogspot.com/search/label/A.B.C.
But what of my relationship with Harry?
I said he was an enigma...I never ceased to be amazed at the interests he had...he played saxaphone, well, as a young man. He had a great interest in photography and told me of how he submitted his photos into contests run by the photographic journals of the day, winning prizes of photographic materials which allowed him to continue his hobby.
He frequented all sorts of auctions throughout his life, making shrewd purchases for subsequent resale.
He was a lifelong member of The Vintage Motorcycle Club of Australia (NSW) and was generous in donating a sizeable percentage of funds to the club when they auctioned some of his bikes and parts in the 1980's. He often was seen at their club rides in the 1970's on a HD, but shunned company unless he took a shine to you.
I recall in the early 1970's on a visit to Munroe Machinery in Chippendale, Sydney, we spoke of a news documentary on Sydney TV one Sunday evening and during this particular one, reference was made of a large collection of glass plate negatives taken during 1895-1910 by Charles Kerry a Sydney photographer. Mention was made that half the collection was missing and then Harry revealed that he had it, having purchased it in 1942 for about $88 in todays money.
He wanted it donated to a "useful" museum...I arranged it and there were 3500 glass plate negatives in all, the Macleay Museum in the grounds of Sydney University has them and they are referred to as "The Beanham Collection".
We got on well together.....
Stories abound.... but more for another day....
Let me share some of Harry's photographs that I have with you....
Left click on the images to enlarge....

Another of Harry's great interest in motorcycles was the LE Velocette of all things and there were approximately 38 auctioned off after his death...
Sydney was awash with LE's.....

Harry's daughter Pam sits on an LE in the grounds of their house in Wollstonecraft, Sydney, with Harry and his wife behind. 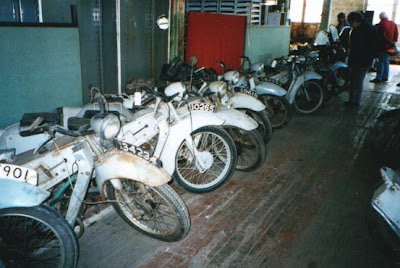 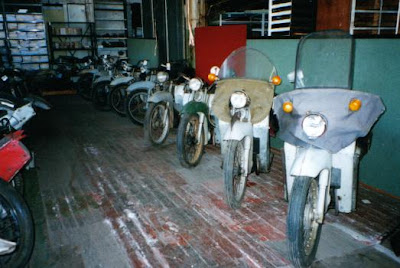 He traded under other company names...Gearco, Munroe Machinery, Allgears, Camco...


Then he used his camera when he went touring, both in NSW and into Victoria... 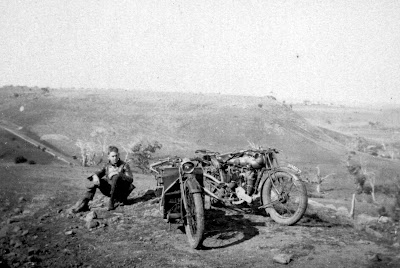 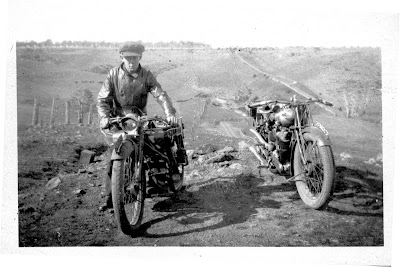 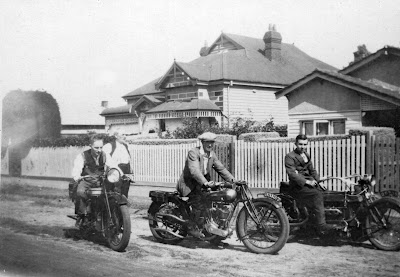 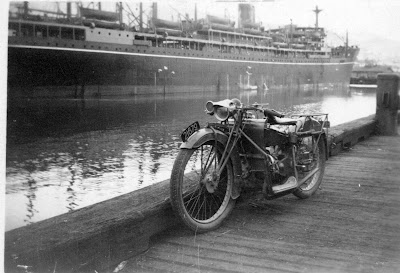 Posted by The Velobanjogent at 9:21 PM

Harry Beanham was my fathers cousin, my 2nd cousin, and I only met up with him during my family history research. He was a great help and his photos especially so.

A nice old gent, and he set a record for the Beanham longevity, one I doubt I will beat.

He was my Father.

Allparts motorcycles the forerunner of Modak was started by my father John Young. Rob & Harry Beanham both worked for him along with Wally Benn when the business was started, Rob & Harry took over the two original Allparts shops in Elizabeth St & Wentworth Ave, while Wally Benn went into his own gear cutting business in Melbourne.I have several photos of the original Melbourne & Sydney business'& I believe that my brother & sisters also have others.Incidentally the original Allparts in Elizabeth St, was up the top of the street near Ryans Engineering supplies.You will find on ratepayers records that my father owned the Elizabeth St shop, I am not sure about Wentworth Ave.
Chris Young

I used to play at Munro Machinery as a Kid after it closed down. Harry would sometimes ride there on an old motor bike and have a look around. At the time I didn't know who he was.I would sometimes see him riding around North Sydney when i was older. I also have a memory of an old man showing me and a friend around Munro Machinery in around 1970-71 when some of the machines were working, must have been very just before it moved/closed. cheers steve

I worked for Harry in Brisbane in 1963. He was a bit eccentric but nice enough. He had a Velocette stored way in Brisbane for his trips there. Some details here: