In an earlier post about a year ago ( July 24th 2008 to be exact) I published a letter and photos from the German record breaker, Ernst Henne that Alan Schafer had written to.
Alan had an extensive series of scrap-book of cuttings from motorcycle magazines of the mid 1930's which he also gave to me years back.
I have good scanning equipment now, with an A3 sized scanner and so these newspaper cuttings can be scanned and prepared in Adobe Photoshop programs to give acceptable results for publishing.
These are some of the cuttings covering Henne's attack on the world motocycle record on 28th November 1937.
They likely came from the UK magazine "Motorcycling", ownership which now rests with Mortons Motorcycle Media to whom I make full acknowledgement.
Read on.....
Left click on images to enlarge..... 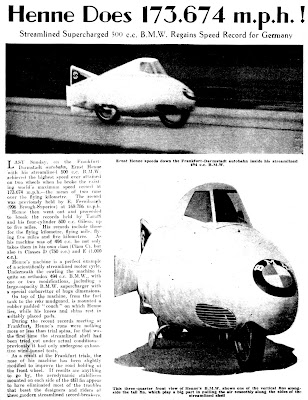 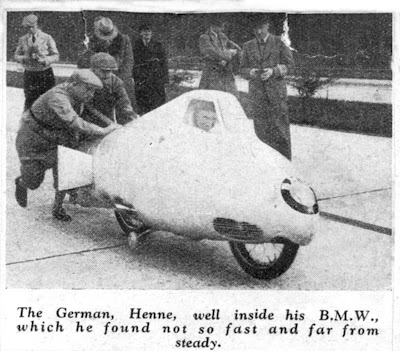 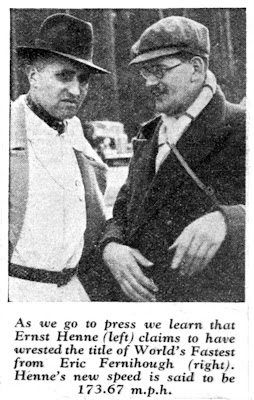 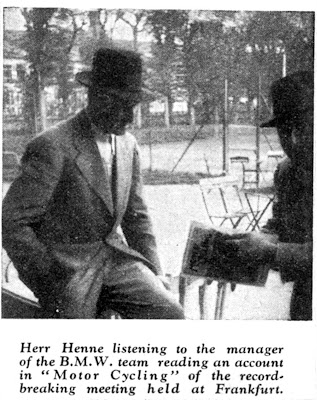 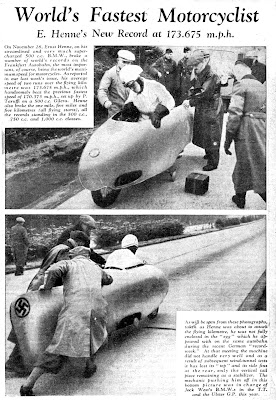 Posted by The Velobanjogent at 10:49 PM 2 comments:

Amal Ltd., until recently at Holford Works, Perry Bar, Birmingham, UK. was a conglomeration of several carburettor manufacturers from the 1920's , such as B & B, AMAC, Binks and I don't intend to get into the reasons, date etc for this amalgamation, rather to discuss the model AMAL used on most British Motorcycles from 1933 into about 1955.
Why you may ask....?
Well I had purchased all the literature of a Sydney Motorcycle accessory house when they closed in the 1990's after trading from onwards from the 1920's.
W.F.Omodei Pty.,Ltd, more easily known as Omodeis.....
There was a lot of Amal stuff and when I got it, a cursory glance through it revealed catalogues for the many Amal Carburettor types and I intend to feature these types...Amal TT, Amal GP, Amal GP2 and the earlier Amal type 27 track carburettors in later blogs.
Recently I noted some correspondence that had been overlooked until then...I've included the seven pages below which is a letter from Amal to W.F. Omodei dated 30th December 1946, together with Carburettor Service bulletin no.1 and no.2.
These are a sort of "Rosetta stone", in that they reveal why Amal changed the design of what we will call the 276 carburettor, although pre-war they were know as "76" type, then the "276" type.
More importantly there was a change of where air was drawn into the pilot system of these carburettor types and as such they are not fully interchangeable with the body or the internal jet block.
Many of these carb.types are found in autojumbles in pieces ...I had a heap of dismantled bodies, jet blocks etc, of both types and was unaware of the difference, although I noted holes around the body below the induction area on some.
Mismatch and you have the problem of getting the carburettor to run properly.
It seems various motorcycle manufacturer's war departments, who had started into war work early had requested special carburettor bodies without holes so that air would only be drawn through the main venturi into the pilot air holes and with their special air filter for the expected desert use of the bikes, would ensure clean air into the carburettor and thus the engine.
Omodies noticed this on their first shipment of spare parts from the UK in 1946.
Interestingly, the other Sydney firm, Allparts had started making Amal copies with spare parts in brass during the WW2.
Below are Amal sectioned drawings of the two types....
Left click on images to enlarge.
Letter to W.F.Omodei...


July 1936 parts drawing and caburettors,showing holes in the body.

Illustrations from a Velocette war edition instruction manual for the MAC 350cc.

Illustration from a 1954 Amal catalogue.
Posted by The Velobanjogent at 9:46 PM No comments:

Keith Bryen continues racing in some smaller meetings in Italy and France during 1956......

As well as the major GPs, Keith Bryen, Australian privateer continued on his continental racing odyssey with wife Gwen in their converted van, taking in some smaller meetings in France and Italy.....
Left click on images to enlarge....
In the north of Italy..... 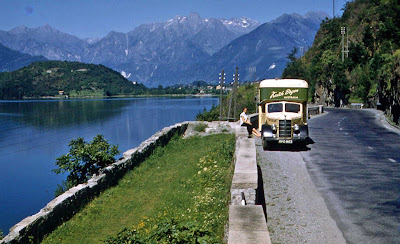 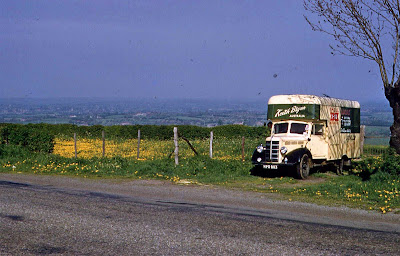 Both following photos are the 500cc race at Villerfranche-de-Rouer, France on 5.08.1956 in which Keith finished 3rd. 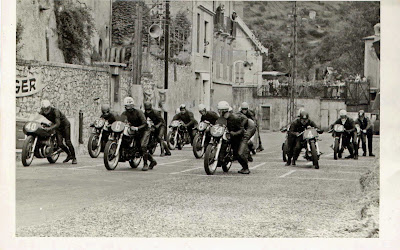 The Australian privateer, Keith Bryen continues in 1956...he did a few of the European GP's and so for the next few blogs we'll feature this....
As mentioned, Keith kindly provided me copies of photographs from his private collection.
There is much interest in these posts from emails and comments....the concensus is the insight into the life of a privateer via the photos is great.
Keith, again, our thanks....
Left click on images to enlarge them...
We move to the Belgium GP at Spa-Francorchamps......
Keith sits on the grid for the 350cc GP in which he finished 13th. 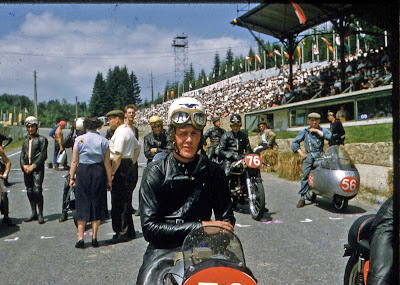 Start of the 350cc Belgium GP. 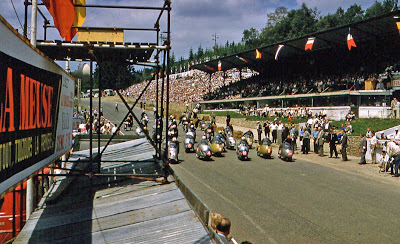 On the grid for the 500cc Belgium GP. 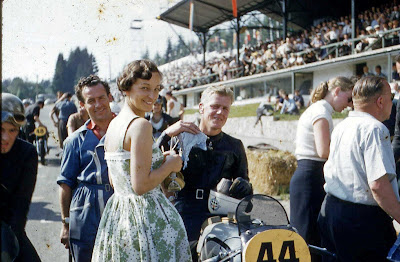 At Solitude, for the German GP. 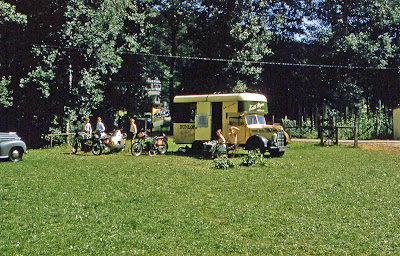 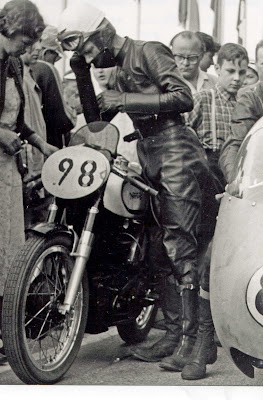 On the grid for the 350cc German GP. with Keith Kavanagh on the works Moto
Guzzi. 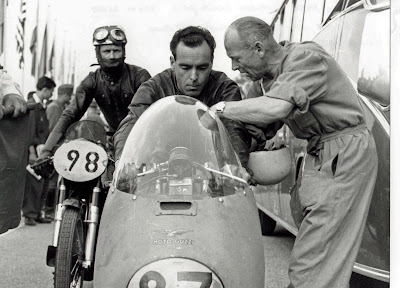 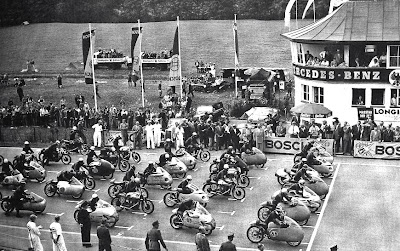 Mathews, Bryen and Storr during the 350cc race, German GP at Solitude.

Keith during the 500cc German GP, he finished 6th. 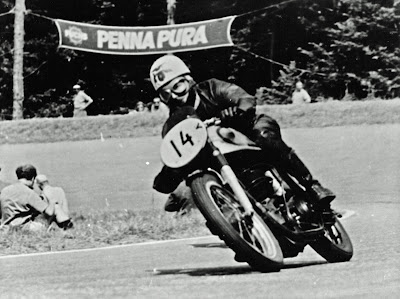 Another in this series of blogs featuring the Australian privateer, Keith Bryen ( finally rewarded with a factory Moto Guzzi ride in late 1956) from photographs he kindly provided me from his private collection.
There is much interest in these posts from emails and comments....the concensus is the insight into the life of a privateer via the photos is great.
Keith, our thanks....
Left click on images to enlarge them...
I mentioned this comment before from Keith, but it warrants being included here....
"...1956 was a good year for me as I gradually improved and gained a lot of confidence.
Never at any stage did I harbour any thoughts of becoming a factory rider, I was just enjoying the racing and being able to see other parts of the world and having Gwen with me made it all so much more enjoyable....." 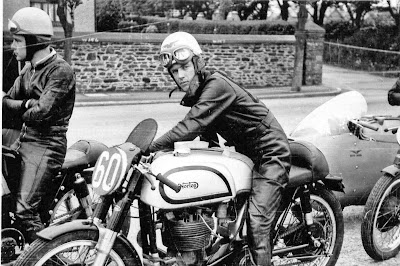 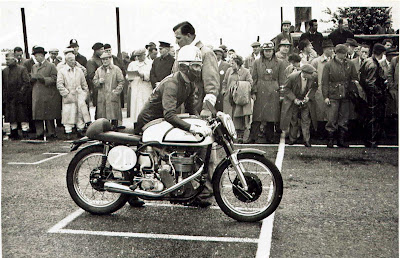 Ready to start in the Senior TT...retired probably due to mechanical failure. 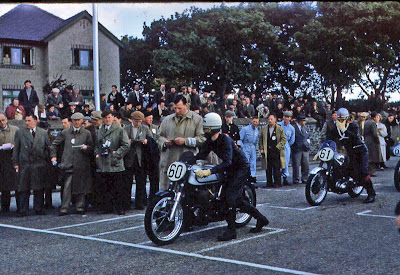 At Cronk-ne-Mona during the Junior TT... 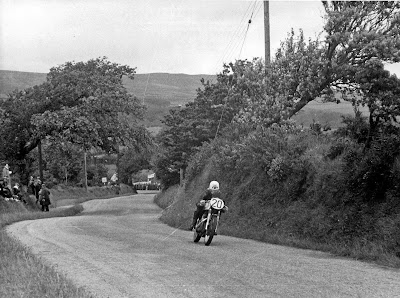 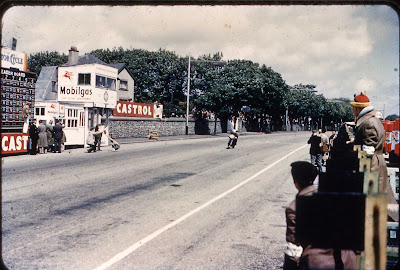 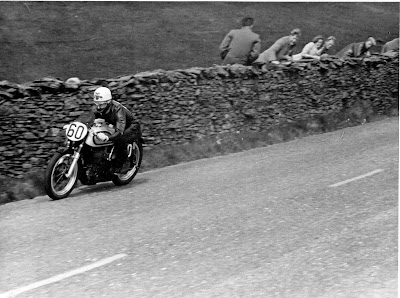 Back on the mainland, Keith teamed up with Percy Tait and together they won the 650cc class of the 9 hour race at Thruxton.... 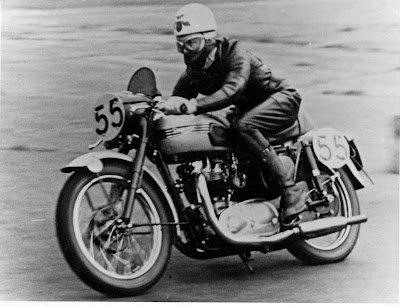 Back on the Continent for the Dutch TT at Assen...
On the grid for the 350cc race in which he finished 14th..

Posted by The Velobanjogent at 10:29 AM 2 comments:

As I mentioned in the previous blog, I've these interesting selection of small photographic prints taken, likely during a day visit or perhaps a holiday visit to the Isle of Man during TT time...
I've had interest in Keith Bryen's racing photographs in the previous blogs I've posted; these chronicle his racing career and there are more to come... the next blog we'll continue....
Just to whet your appetite, a pic taken in 1957 in the Moto Guzzi team tent.....
Left click on images to enlarge them.... 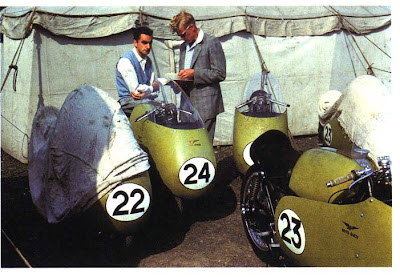 
Finally another two photos from Barry Sewell's collection ( I inadvertently listed them initially as from Alan Schafer...).....both at Scarborough.
July 1951 meeting...A.Dudley Ward on his Triumph based Dudley-Ward Special.

Posted by The Velobanjogent at 10:17 PM 2 comments: