Following my previous post I'm staying with Artur Fenzlau and his camera...great, sharp, interesting photographs taken on the 26th and 27th March 1955 during practice and racing on a hill climb circuit organized by the Motor Sports Club "Around Vienna" which started in Klosterneuberg and finished in Josefinenhutte...
I've been onto Google Earth and fiddled around and think I could have the actual course...well as it is today...

Again acknowledgement is made to the Technical Museum of Austria in Vienna and the estate of the late Artur Fenzlau for this non commercial posting of these photographs...

Most of the riders are un-named, however the NSU works rider, H.P. Muller riding an NSU Sportsmax #1
and Erwin Lechner (50) on a 125cc KTM; Gerold Klinger (5) on an RS 500cc BMW;Rudolf Grimas (19) on a 125cc Mondial are the only other riders identified. 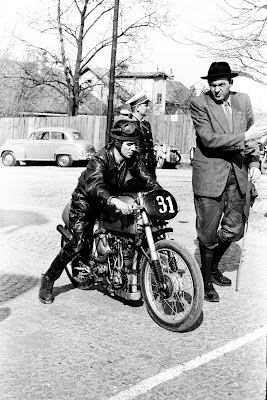 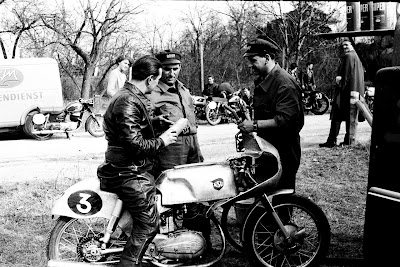 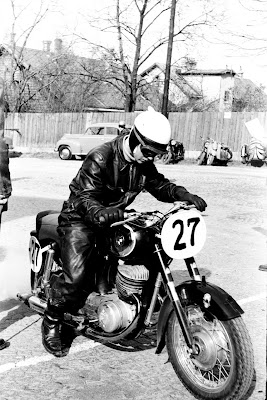 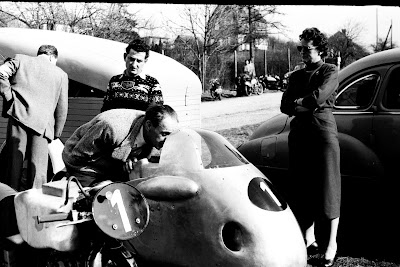 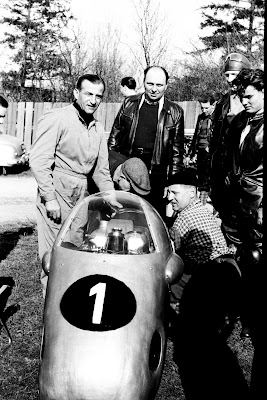 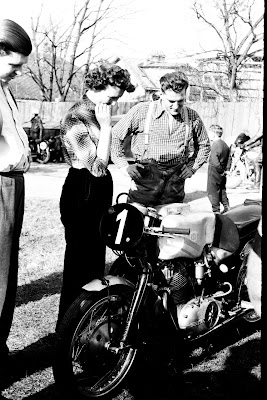 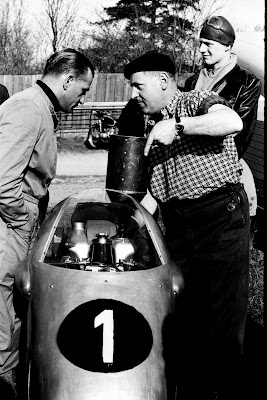 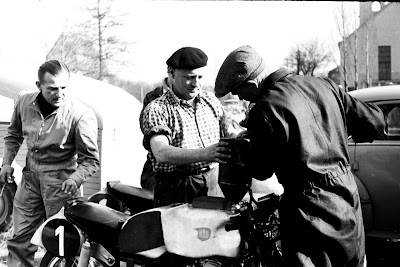 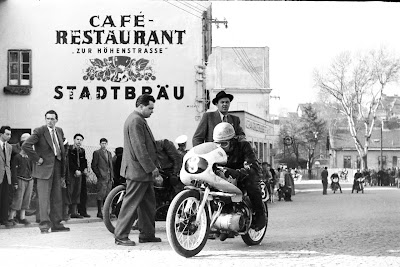 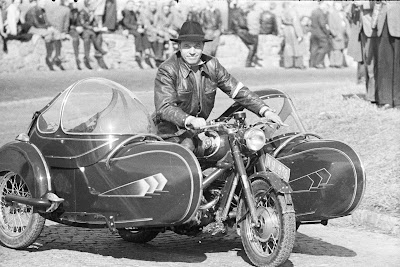 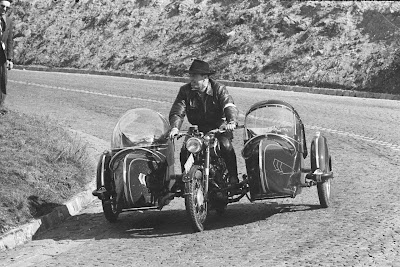 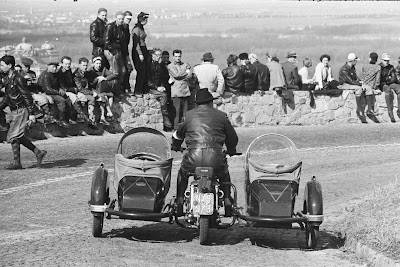 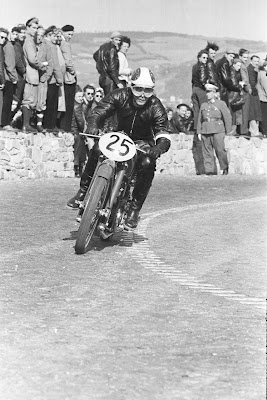 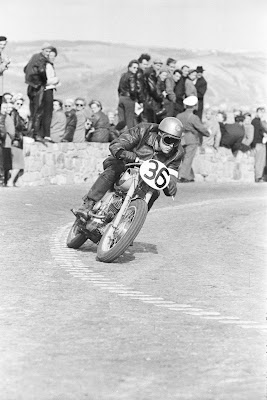 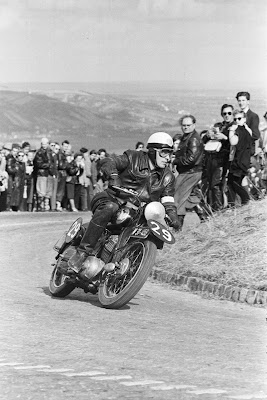 Posted by The Velobanjogent at 12:10 AM No comments:

Artur Fenzlau...Austrian motorcycle and motor racing photographer....a look at some of his photos from before WW2........

Artur Fenzlau was an Austrian motorcycle and motor racing photographer from a young man in the 1920's up to his death in 1984.
His extensive photographic and negative collection has, in the main, gone to the Technical Museum of Austria in Vienna who have digitised much of it and it is available for the public to view on their website....
http://www.technischesmuseum.at/
If English is your first language, you are better logging onto the URL using Google Chrome as it has a translation facility.
The copyright for these images is held by the museum and the estate of Artur Fenslau and I acknowledge this for their use on this blog and post which is non commercial.
So I've selected a few of the images for this post...some from the Swiss GP in 1935 and 1936, some from some minor GP events in 1932 and 1933 and the others from the races near Vienna in June 1939.
1933 Odenburger Landerkampf,#14,Franz Falk Velocette.
1933 Odenburger Landerkampf,#16,Emanuel Völkl ,OHC Norton 350.
1932,GP von Odenburg..Velocette in the foreground. 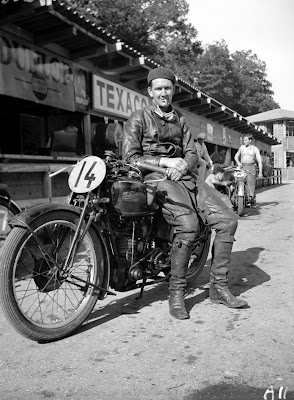 Posted by The Velobanjogent at 1:50 PM 4 comments:

Some more "Fillin drawings" as I call them from "MotorCycling" and "MotorCycle" with the occasional photo....I use these items to illustrate the Australian Velocette OC magazine FTDU and I know they are used by Lenore Cox, editor of the US Velo Club's FTW and Carl Drees in The Netherlands Velo OC magazine "Visstaart"....

I last did a post on some of these in July 2010, so another is long overdue.
I'm a great follower of the skill of pen and ink drawings to illustrate magazines....not so common these days....
Of course the copyright for those I'll use is now held by Mortons Motorcycle Media in the UK, the owners of the now defunct "MotorCycling" and "The MotorCycle" .

The first one shows a part of the special frame made by Doug St.Julian Beasley in the UK in the early 1950's...obviously influenced by the newly seen Norton Featherbed frame, Beasley made frames predominately for Velocette engines and the KTT in particular.
The illustration, above, was in June 1951...
In 1953 the Australian rider Sid Willis accompanied another Aussie, Tony McAlpine on a European tour...riding as part of "The Continental Circus".
Sid took one bike, a rigid framed Velocette 250, with his converted 1936 ex works DOHC Velo cylinder head and cambox fitted and making a 250cc.
It went very quickly in the first few European races they went to before the IOM TT, but the handling on the cobblestone parts of the circuits restricted him.
When in the UK they sought out Doug Beasley and he made a frame for Sid.
The photo below shows Sid ( RHS), Doug Beasley (centre) and Tony (LHS) working on the bike in Doug's workshop.
Then below it, Sid in the IOM TT.
He finished 5th in the Lightweight TT, the first privateer home. 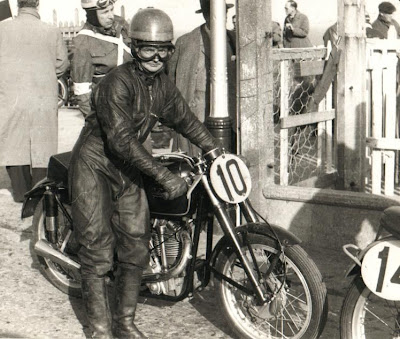 Why don't we have a look at Doug himself in the IOM TT...photo taken by S.R.Keig, the Douglas IOM photographic studio. Taken in June 1952. Doug retired during the race.
Phew, I got a bit carried away "photographically" above...back on track DQ..lets look at some more "fillin" drawings... 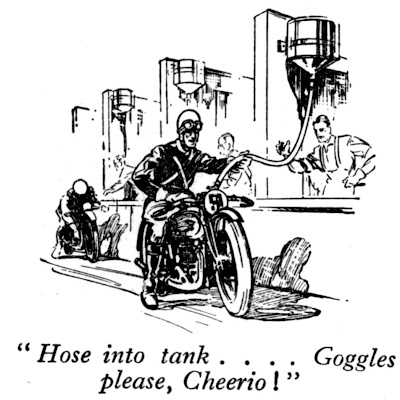 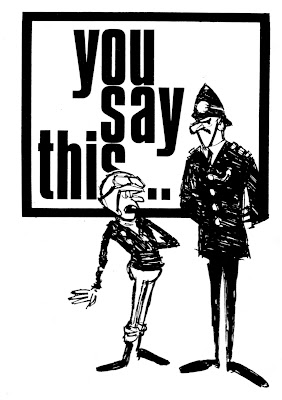 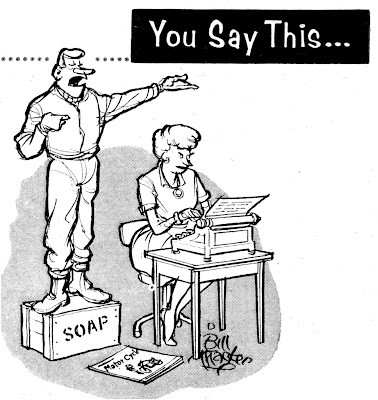 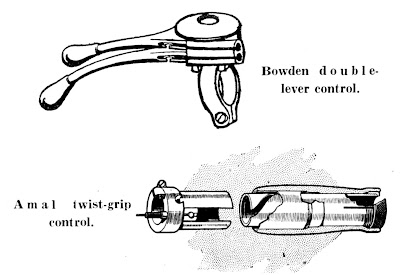 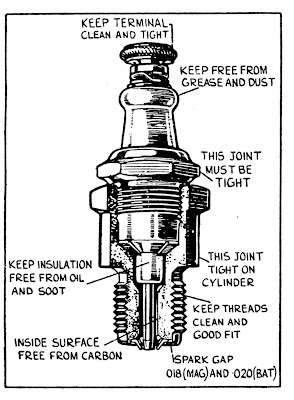 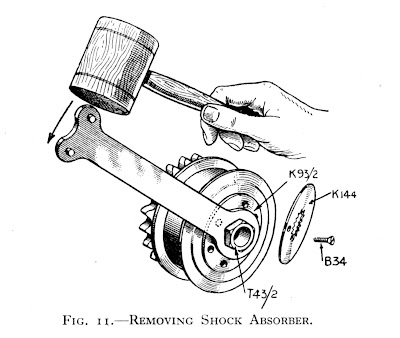 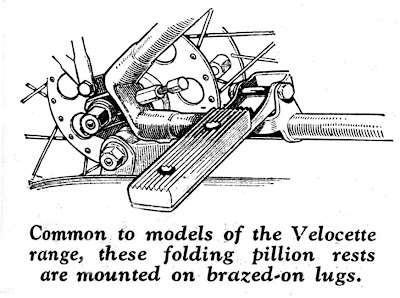 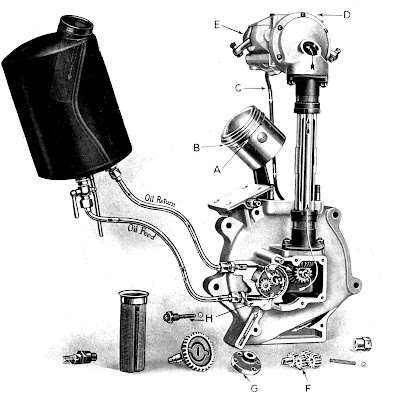 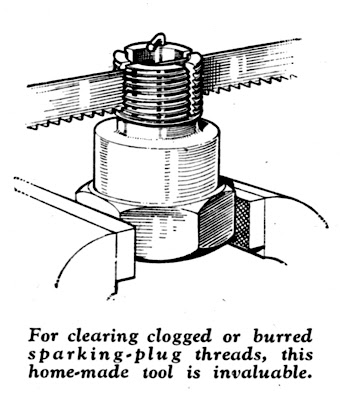 This final drawing from the French Motorcycle magazine "Moto revue"...
Posted by The Velobanjogent at 11:34 AM 1 comment: