The KDT Velocette....Velocette's attempt to break into the Speedway machine market in 1929....

Little is known of the KDT Velocette.... a variant of the KTT Velocette introduced by Veloce Ltd in late 1928 as a production racer motorcycle for the privateer rider.....
In fact a glance through the Veloce factory records for the time show 20 machines listed of which one appears to be an engine only, during 1929.
Speedway had become all the rage, Vincent's had a flutter, Douglas and Rudge reigned supreme for some years before the Speedway JAP swept all before it until it too succumbed to the JAWA speedway engine.
The details of the specification for the bike is also vague...it was first announced in The MotorCycle, August 1st, 1929 as a new 415cc OHC dirt track model.... 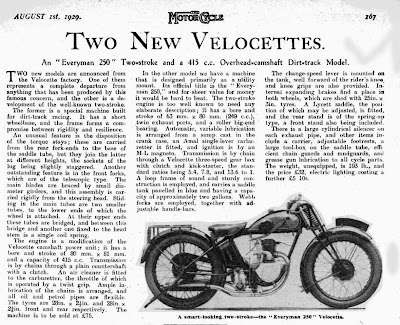 Regretably there was no photo at the time and even the capacity of 415cc is in doubt.
The bore is 80mm and the stroke 81mm and this calculates as 407cc...


An article from Motorcycle in late 1970s, by Bob Currie.


Speedway followers of the dim and distant past could buy “ genuine autographed photographers” of their heroes from kiosks at the stadium, just as can today’s aficionados of the shale.


And it is a faded postcard from 1929 that I show you here by courtesy of Vintage MCC photographic registrar, Dick Platt.


The subject as you can see is Bert Clayton from Huddersfield who not only competed at the northern UK speedway tracks but took part also in hill-climbs and other branches of motorcycle sport.


It was on August 4 1928 that Huddersfield Speedway opened up at Quarmby before a 6,000 crowd Bert Clayton a local Velocette agent was one of the many riders who sampled the dirt for the first time that night.


And he certainly seems to have acquired a taste for it because when the “Yorkshire Championships Belt” competition was organised for Quarmby’s second meeting Bert on a 350 cc cammy Velo, finished second to Sheffield’s H W (“Skid”) Skinner.


The Huddersfield track was short-lived and had gone by the time Northern League came into existence in 1929.


Still there were plenty more Leeds (Fullerion Park) Halifax (Thrum Hall) Sheffield (Owlerton) and Barnsley (Lundwood) were all in the Northern League as were their Lancashire counterparts of Salford, Rochdale, Belle Vue, Liverpool, Warrington and Preston; Wombwell ran invitational meetings only.


In fact there were too many tracks – & although Leeds were on top of the Northern League at the end of the 1929 season they had already gone into liquidation.


Their star rider George Greenwood moved south and eventually he was to take over the manufacture of JAP speedway engines but that’s another story.


Nearly every major factory tried to cash in the new craze and the Velocette contribution was the 411 cc Model KDT using an overboard version the 350 cc overhead-camshaft engine.


The standard Velocette gearbox shell was employed but this had no internals and was used as a single-speed countershaft. No separate oil tank was contained in a compartment of the little fuel tank.The Velocette register still exists and from it we know that machine number KDT149 was delivered to H Clayton of Huddersfield on 29th July 1929.


But Bert was one of painfully few customers. Only 22 model KDTs were made in all and the late Bob Burgess formerly service manager at Hall Green confirmed that some of the batch were returned unsold to the factory to be converted into 350 cc KTT models.


For how long Bert Clayton rode the Velo on the northern tracks is unknown – but KDT149 (or, at least its engine unit) survives today He has too the correct type of KDT rear wheel and a suitable Webb speedway fork. At present the engine powers a reasonable replica of a Velocette speedway frame but that isn’t quite the same thing as having the genuine article.
The poor quality photograph scans as...
The engine, KDT149 ended up in the 1970's in an attempt by the late Jeff Clew to rebuild it as a speedway dirt track Velocette.


I had some photographs from the one KDT that was imported into Sydney,NSW, Australia in 1929, details were 30th Sept.1929, engine KDT151 frame 16. The photos were of Billie Woodman riding what he had told me was a dirt track Velocette at Penrith  Speedway in 1936... 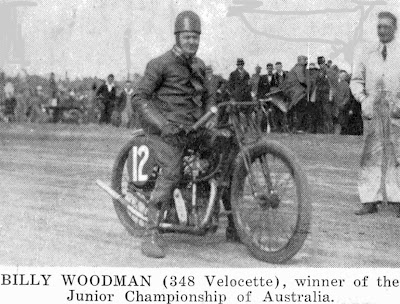 The above photo shows Woodman leading Cec Weatherby on a standard KTT Velocette. Note the fork spring on Woodman's machine in this and the previous photo.

At the 2012 National Australian Velocette Rally in Bundanoon, Dai Gibberson was an entrant from the UK and keen to swap Velocette photos and literature, we downloaded to each others computer.
I have not had as much time as I'd like to review his items and it was only the other night when I opened a file "1929 DT  Special".
There to my amazement was a large resolution timing side photo of the 1929 DT Velocette and it shows much of the specification we had not been really aware of... 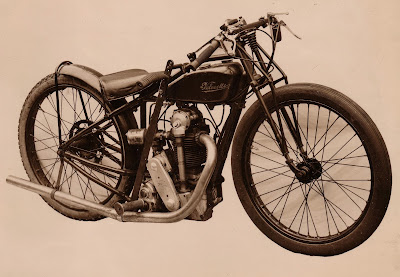 
The tyre size appear to be 28 x 2.75" and the rear is a Hutchison. But interestingly, to me anyhow, the rear rim appears to be a beaded edge type while the front a well base type...??

The front forks appear to be an interesting type of Webb fork with a form of bottom slider and the top spring is unusual and if you scroll back to the Woodman bike further above you'll see it has the same spring arrangement.
The transfer on the fuel tank appear to have "The Velocette".....

The petrol tap is unusual in that it is on its side and the knee handle is clearly visible and differs from the Clew Velocette.
The frame also appears to differs from Clews in that the engine and gearbox shell and there is no gear linkage, so the gearbox is "empty" of ratios...both are in front of the seat tube whereas Clews has a more usual Velocette frame of the time.
And finally...while visiting Ivan Rhodes at "Fellside Cottage" in September where I took many photos and the next episode of that oddessy will appear shortly...Ivan showed me two new KDT pistons he had, one fitted to a mid 1930's works machine...in this case the piston was a 1 mm oversize, but its crown shape is clearly visible in the photo following...

Posted by The Velobanjogent at 4:53 PM No comments: