Time for a look through some Veloce Ltd. publicity photographs......

I acquire still Veloce Ltd publicity photos, often from different sources....in some of the photos to follow they came off calendars from the early 1980's.....
Veloce Ltd of course manufactured the Velocette motorcycle....
So I'm not always sure of their origin, but there is a good chance they came from "The MotorCycle" and "MotorCycling" , the copyright of which is now held by Morton's Motorcycle Media in the UK and to who I acknowledge credit if applicable.
Left click on the images to enlarge.....
Two new 1953 MAC 350cc Velocettes...the tubular silencer dates them to 1953...... 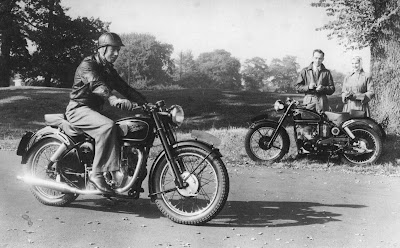 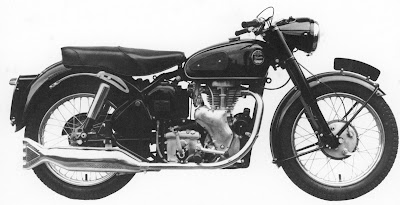 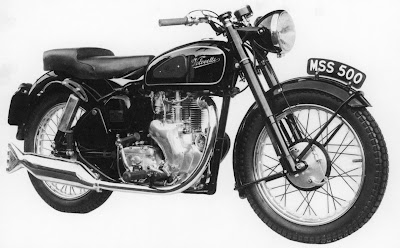 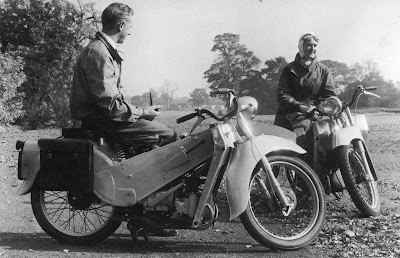 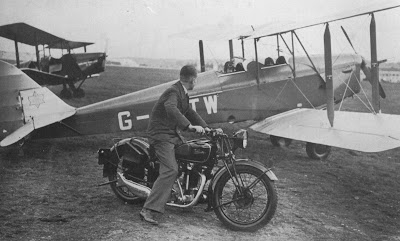 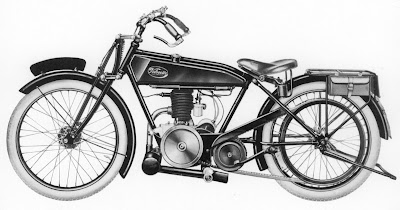 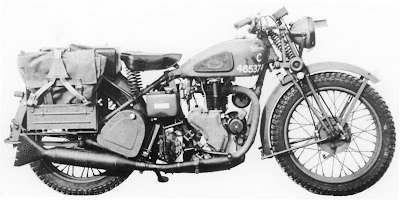 Posted by The Velobanjogent at 9:57 PM No comments:

A brief peek though DQs camera at the classic motorcycle races at Pukekohe,NZ 2010......

Pukekohe has come a long way since the first tentative classic race meeting in the early 1980's.....
Three Aussies were invited as guests to give it an international flavour and I was one with my 1939 Mk.8 KTT, together with Eric Debenham on a Vincent/Norton special and Elmer McCabe on a 7R AJS.....
I flew Velocettes over for several years, then borrowed racing bikes, then retirement from racing set in but I attended continuously until around 5 years back.....
It has come a long way since then....many European former champions, together with exotic racing machinery have been the meetings special guest(s), John Surtees, Ivan Rhodes, Sammy Miller, Paul Smart, Kevin Schwantz come to mind and this year was Dutchman Ferry Brouwer with his 125cc 4 cylinder Yamaha....
Ferry and I correspond....He has done much for the Classic scene in Europe with his coupe being the Centenary TT at Assen in the late 1990's...many former NZ and Australian racers of the period were invited....so payback time....
Would I come over and meet up with him....? Of course, but circumstances at the last minute prevented his coming and his two mechanics, Melwyn and Andre did a good job keeping the Yamaha fettled for the display laps and former world champion NZer Hugh Anderson climbed aboard and did the honours....
Following are a few pics from my camera... looking back I should have taken more diverse ones....
But I'm sure these will prove interesting....
Left click on the images to enlarge.....


The Anderson family had several KTT's in imaculate fettle....


NZer and Veloman Neville Mickelson with his Matchless outfit and daughter in the chair....

Some years back this minaturised 250 DOHC desmodromic Manx Norton appeared.... one of a pair, the other a conventional DOHC engined bike was bought by Ferry Brouwer....

For several years a Japanese rider,Shizuka Motegi, has ridden his 1950's BMW Rennsport at Pukekohe....thanks to Glenn Ducey for ferreting out his name- I'd forgotten it!

I've seen this replica of the 250 BSA racer than never graced Britains race tracks.... the original BSA factory race effort was a flat single and from memory had cylinder and head finning to suit.....just the same this is an interesting effort.


Being a Velo man I like to fraternise with the NZ Velo folk..... well this pic shows some other Aussie Velo people outside the NZ Velo Register display and tent.


A typical paddock scene the world over.....

Posted by The Velobanjogent at 11:41 AM 4 comments:

A steaming hot mug of Cadbury's cocoa after practice during the IOM TT......

I've only one pic for this blog and I think it is really evocative of the IOM at TT practice time ....when?
I guess there are others who will research when Cadbury had their tent offering steaming hot mugs of their best cocoa to riders on a cold morning after practice......
The pic shows just such a shot with what else but a Mk.8 KTT Velocette.....
But others have seen this original water-colour at my house....yes I forked out heaps to buy this in the late 1980's, to Thomas Quinn who lived in the San Francisco area and was an illustrator for the US "Car and Driver" magazine. This illustrated an article, likely in 1985 by the note in the bottom RH corner....
Regrettably I don't seem to have the original magazine...unusual for DQ, but.....
Back to the "others"...
Ivan Rhodes often stays with me on his infrequent visits to Sydney and commented that he thought the KTT was his... as the brass plaque on the rear mudguard was identical and the tall rider...aged by the artist, was his son Grahame Rhodes.....
I suspect it was painted from a photo taken by others.....
Its a favourite painting of mine and one I'm pleased to share with you......
Left click on the image to enlarge....

Posted by The Velobanjogent at 11:32 PM 2 comments:

When I set out to do this blog, Keith Heckles featured in it because he finished second in the 1967 IOM 500cc class of the Production TT.....I was preparing a blog of the last time Velocette won a TT...... however Keith passed away on 28th January 2010, aged 75 year old.
So a short tribute to him from several people, featured on the Manx Grand Prix Community website...the URL is...
http://www.manxgrandprix.org/Community/Communitynews.html


1967 Manx Grand Prix lap record holder, Keith Heckles has died. Keith passed away peacefully at his home in . He was 75 years old.
A past vice chairman of the Riders' Association, Keith's best finish in the MGP was second. Moving on to the TT, he famously started with Giacomo Agostini on two occasions.
Keith's funeral will take place on Tuesday 2nd February, 10.30am at Springwood Crematorium, Garston, . Donations in lieu of flowers to the TTRA. 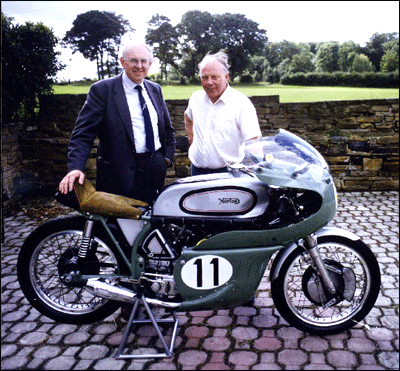 Mike Steel (right) and Keith Heckles with the Junior Beart Norton on which Keith finished second in the 1966 Junior MGP. Photo from Manx GP community website.

As the name of this blog indicates, 1967 was the last time Velocette won a TT, they were first and second in the 500cc class of the Production TT..... during their active racing efforts up until the early 1950's, a 500cc win, then the Senior TT, eluded them.... ironic that they finally won in a 500cc class.....
The following is the article I did in the current Australian Velocette OC magazine, Fish Tail Down Under ...number FTDU350.....
I acknowledge Mortons Motorcycle Media for the MotorCycling and The MotorCycle items and Motorcyclist Illustrated for the colour photo of the winner Neil Kelly....
Left click on image in the blog to enlarge....

Acknowledgement is made to Morton’s Motorcycle Media, copyright holders.

As the 500s keyed themselves up to start five minutes after the unlimited class got away and the 250s waited to get away after another five minute interval, John Hartle had snatched the 750cc lead inside a couple of miles. And from then on, with clear roads in front of him all the way, he was never headed.

But as other riders kicked their engines into life, Graham Penny pressed the starter button on his 444cc Honda and got away at the head of the field, closely followed by Hugh Evans (BSA A50) and Tony Dunnell (305 Honda).

Tait left with the pack, as Bob Biscardine, Neil Kelly and Arthur Lavington all struggled to coax their reluctant Velocette “Thruxton Venoms” to life.

Yet by the time they reached Ballacraine, Kelly lay third on the Reg Orpin machine behind leader Keith Heckles with the Geoff Dodkin “Thruxton Venom” and Penny – and barely a second between each of them.

But there was no sign of Tait, and the leaders were through Ramsay, 24 miles out, before the commentator reported that Percy had gone over the famous jump “touring”. So it looked as though Triumph had next to no chance of pulling off a 500 and 750cc double, even with Hartle already so far ahead in the big class.

On the gruelling 1400 ft. climb from Ramsey to the Bungalow, Kelly wrested the lead from Heckles and started to pull away- the Peel rider upsetting the form book since he had not once figured on the 500cc leader board in practice.

Interesting this…my information was that they used standard Venom Thruxton engines in practice, but were given special squish head engines from Veloce Ltd for the race…these with another 4½BHP…Bertie Goodman told this to me in a letter. .Ed

But, despite his good start, Evans was already out of the race- with a hole in the BSA’s crankcase at Quarry Bends.

Lapping at 88.29mph, Kelly started his second circuit eight seconds in front of Heckles with Penny third, ahead of Dave Nixon (Triumph T100) and Norman Hanks (BSA A50), hotly challenged by Alan Peck on another T100.

Lavington retired at the pits with suspected suspension trouble. And, last of all, was Tait in fourteenth place, and already behind 11 of the 250cc runners who had started five minutes in arrears.

But after fitting a new plug, he set off in pursuit.

And what a pursuit! For Percy flashed through “MotorCyclings’s” “Highlander” time trap to clock the fastest 500cc maximum of the day at 122.9mph. But, less than a mile later on, he overdid it at Appledene and crashed, sustaining abrasions for which he was taken to after the race.

At the end of the lap, the only leader board change was that Peck had snatched fifth place from Hanks by a fifth of a second. But Penny lost third place within yards of starting the last lap when he stopped for petrol as Nixon flashed by.

Putting in his best time of the race with a lap at 91.01mph, Kelly pulled still further ahead on the final circuit to win by just 8 seconds from Heckles –both ahead of the eighth 750.”

Posted by The Velobanjogent at 10:50 PM No comments: