The dynamometers at Velocette......

The dynamometers at Veloce Ltd.
With thanks to Hedley Cox and Dai Gibberson.

Over the years I've researched the dynamometers used at Veloce for the testing of their Velocette engines.
They never had a rolling road type dyno so power at the rear wheel was never tested.
Much of the information we have for certain comes from after 1938 when Velocette built a new test house.
It is pictured, below when opened by Stanley Woods the factories then senior contracted road racer.. 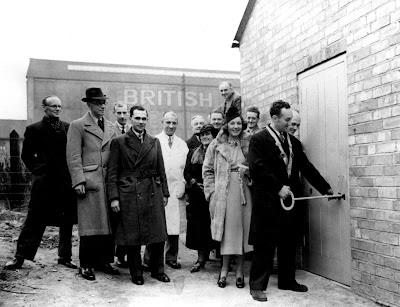 Pictured is Stanley woods, with wife Mildred by his side and the giant key for publicity. In the white lab. coat is Harold Willis the race team chief and development engineer, sadly to die a year later. The managing director, Percy Goodman's head is just visible over Stanley's shoulder. 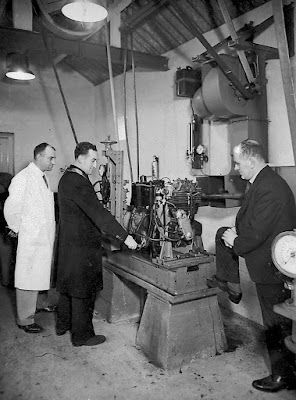 Following the opening of the new test house, the camera moved inside for a pic of Stanley "operating" the throttle of the dynamometer with a factory 350cc SOHC race engine on test. Harold Willis and Percy Goodman look on.
I've formed the opinion that there was only one dynamometer at Veloce before the new test house which when opened contained three. This early Hennan and Froude dyno had a calibration factor of 5500. The comment below is from 1930 and is by Phil Irving in his autobiography, p.160.

Phil Irving's Autobiography is a mine of information on what happened at Veloce 1930-1943.... regretably the costs of his out of print book today on Amazon and others is in the $1000 range...perhaps a good library may have one to peruse... 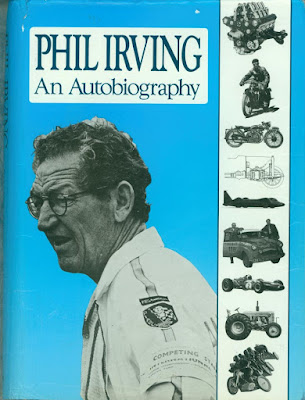 The other two dynos installed  in 1938 were new Heenan and Froude DPX2 dynamometers with a calibration factor of 4500.
What does this calibration factor mean?
These Heenan and Froude dynos were called “water brakes” and utilised hydraulic principles with the power developed by an engine on test being measured in the pull on a spring gauge of pounds (lbs).
So the dyno operator..at Veloce, Tommy Mutton, Frank Panes, Hedley Cox,Freddie Owen, Jack Passant etc…would record pull of the dyno in lbs at a given engine rpm and record the barometric pressure and temperature in the room, which was assumed to be the induction air temperature.
This was recorded in a small notebook and occasionally it would show the uncorrected bhp, that is, not corrected for the air temp. and barometric pressure of the day.
The formula was…. 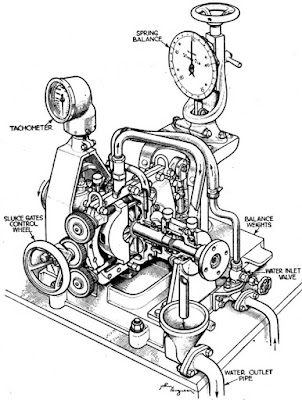 
When Heenan and Froude introduced the DPX2 dyno and Veloce bought two for the new test house, the constant was 4500. The new dynos were called the “centre bench” and it was used for the testing of the works racers and the model KTT, the other was specially setup for the new Roarer engine under construction and pictured elsewhere in this post. The old 5500 dyno was called the “end bench”.


Following WW2 in 1949 the “end bench” was replaced by a new DPX2 dyno by Hedley Cox and the old “end bench” scrapped.
Up to then following the war the “end bench” had been used for running in new mk.8 KTT engines.


During WW2 Phil Irving used this bench to test special MAC and MSS engines for military use. 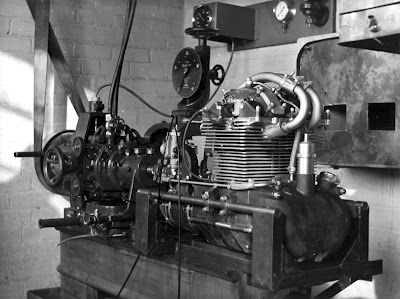 The Roarer engine on the test bench during 1939. 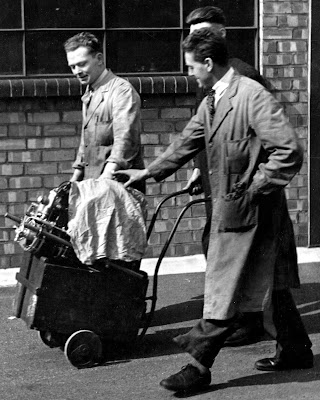 The Roarer engine on the way to the test house during early 1939. 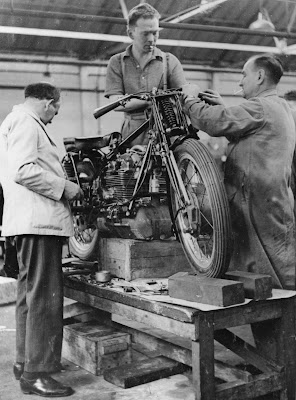 Final construction of the Roarer in time to send over to the 1939 IOM TT where it only completed one lap in practice and was replaced by the normal factory 495cc SOHC  racer. Pictured is, left Percy Goodman, Tommy Mutton on the bike and  Harry Thorne. 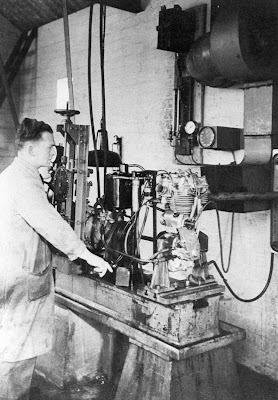 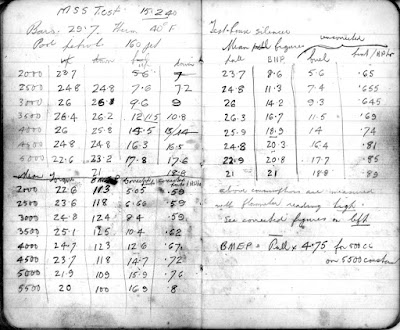 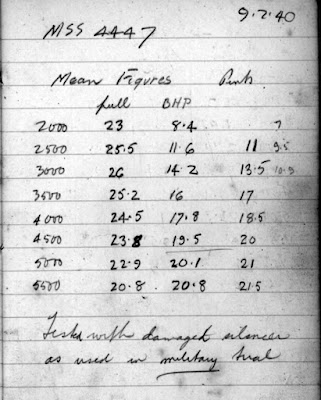 Tests conducted by Phil Irving in 1940 on 495cc MSS engines for coming  military trials, using the older end bench with the 5500 constant.Details from PEI's notebooks of the time.

Following WW2, racing recommenced in 1946 and Velocette re-introduced their prewar factory racers and continued with the mk.8 KTT, which commence with engine number KTT901
Tommy Mutton continued as the senior race mechanic until around 1948 when following disagreements with Charles Udall, then the development engineer he asked to be transferred to another section of the factory.
He is pictured below in 1947 with Chas. Udall and a factory SOHC 350 on test on the centre bench. 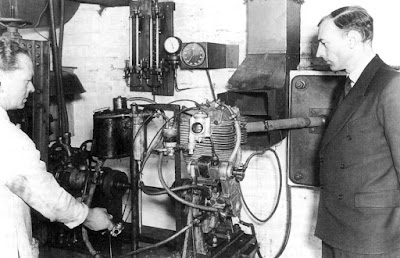 In 1948 Hedley Cox joined Velocette as a race mechanic and details from his lastest book "A Guide to Motorcycle Racing" published in June 2015, p.19,20 the setup in the Test House at that time.... 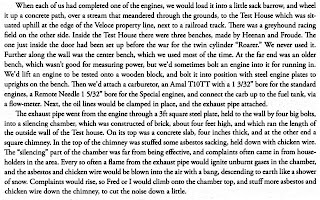 During 1949 the old end bench which Hedley described as worn out and which had only been used to run in mk.8 KTT engines assembled by himself, Frank Panes and Freddie Owen was dismantled by Hedley and replaced by a new Heenan and Froude DPX2 dynamometer...
Very similar to the prewar design....pictured is a 1960 version. 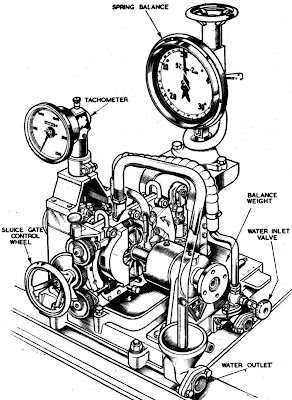 Following Frank Panes leaving Veloce for New Zealand and Hedley Cox's sacking by Bertie Goodman in 1952, Freddie Owens and a new man, Jack Passant were responsible for the last gasps of the Velocette race effort and the cessation of production of the mk.8 KTT.
Jack Passant went on to become the Development engineer up to the factories liquidation and closure in February 1971.
During this time he further developed the MSS and the Venom and was responsible for the  Venom Thruxton engine.
Veloce supplied several to teams in the 1967 IOM TT 500cc Production machine race, won by Neil Kelly on a machine entered by the London dealers L.J. Stevens. 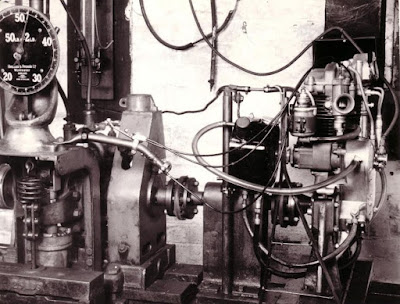 A Venom on the centre bench starting a test... 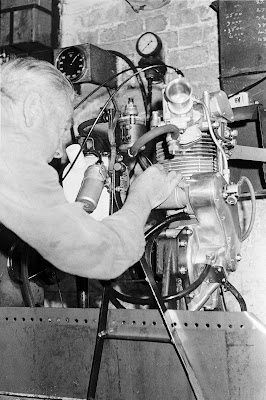 Jack Passant with a Venom Thruxton engine on test 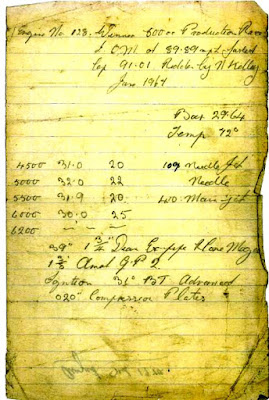 The special VMT engine returned to Velocette after its win in the 1967 500cc class of the production machine race...Jack had it on the test bench....Unsure why there is no reading for 6200rpm, but the uncorrected bhp at 6000rpm is 40bhp. 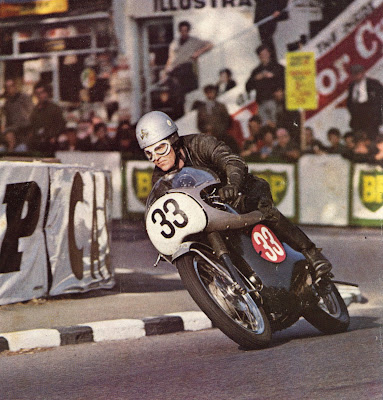 Posted by The Velobanjogent at 10:03 PM No comments: