The text heading for this blog says it all....
"Velocette's 4 cylinder racer".....
"The little engine that never grew up"......
In the early 1950's despite the Velocette board being divided on the prospect of continuing racing, the then Managing Director, Percy Goodman and his son Bertie hatched the idea of a 500cc 4 cylinder racer to win the 500cc world championship and of course the Senior IOM TT.... something that had eluded the company since its first foray into racing in the 1920's.
The 350cc championships had been theirs on many occasions with IOM TT wins in the Junior class...but never a Senior win, despite coming oh so close.
But Percy's death in 1954 changed all that...the board of Veloce closed the racing shop and any thoughts of the projected 500/4 became dusty artifacts at Velocette.
The two UK motorcycle papers did articles on the project in 1961 and in 1965.
I've scanned them and they illustrate this blog rather than ramblings from me....
The first “The little Engine that Never Grew Up”…The MotorCycle 5 May 1960. pages 552-555, details the project with photos of the 125cc test engine then almost completed and the front brake.
The second followed exciting news at the time, 1965, of a lottery by the Manx people to raise funds to build a 500cc British world beater.
Velocette were to be heavily involved with it...
Bertie Goodman featured in the article... 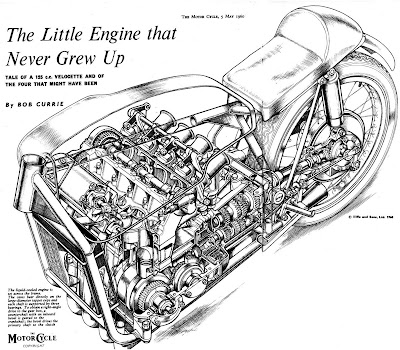 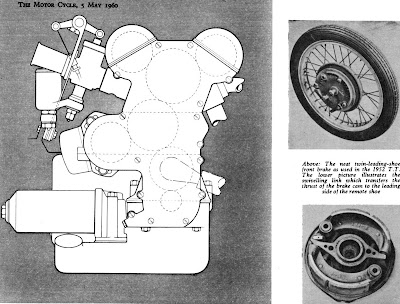 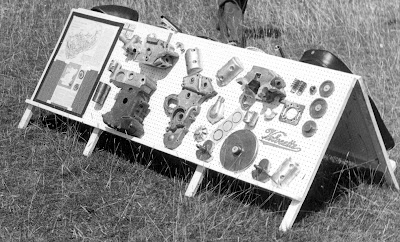 On reading my blog, Dai Gibberson kindly forwarded this photo, above, with the caption..."Velo Rally 1976 4 cylinder prototype...", I await with interest any more information....

Bo Eklund from Sweden a good Veloman, has sent me this following photo, taken in Ralph Seymour's shop between 1988-1990. I would hazard a guess that the items on the display board above were from Seymour's as they likely had a display at the Velo Rally in 1976.
Perhaps the parts are still with the Seymour family? 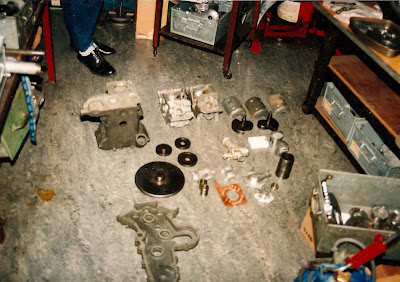 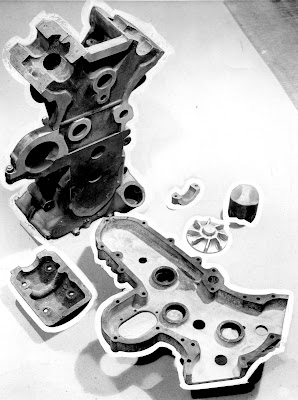 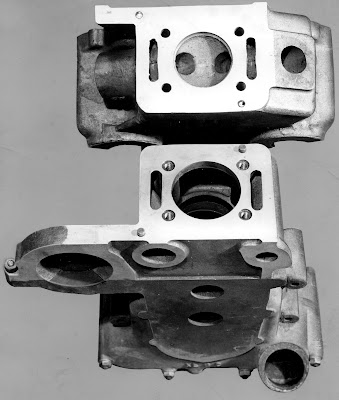 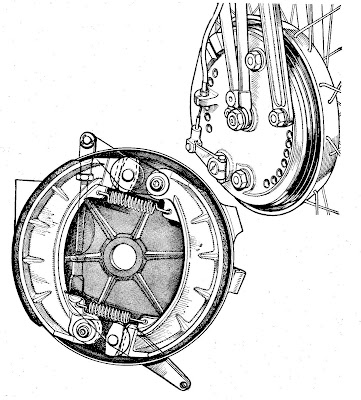 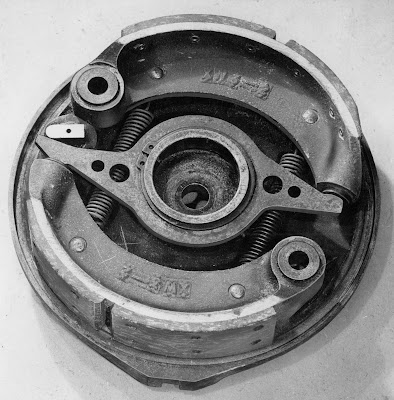 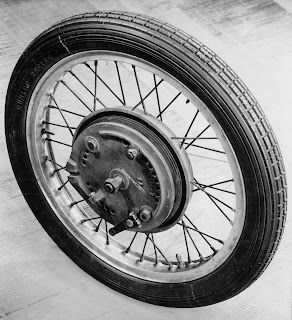 Original "MotorCycle" photos of the front brake and wheel, used in 1952 and earmarked for the ill fated 500/4 project. 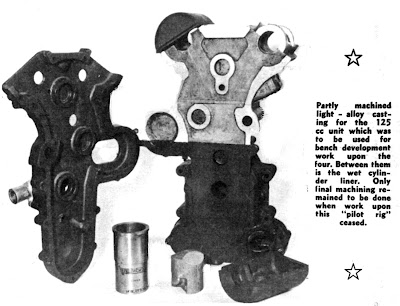 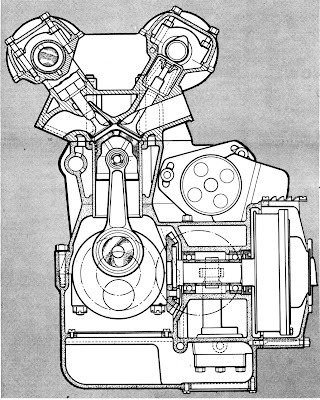 Bertie Goodman was no slouch on a motorcycle... he'll form the basis of a future blog...and was a manufacture who tested and road his products throughout his life... 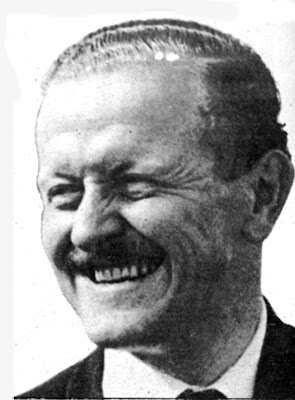 Pictured below testing the Velocette designed telescopic forks on a modified KTT  possibly in the IOM and in 1950-51 and of course coming up on the 18-19 March this year 2011 is the 50th anniversary of the successful Velocette world record 100mph average for 24 hours and which still stands for the 500cc class.
Bertie was completely involved in this attempt...including riding more than the alloted riding stints for the record due to difficulties experienced by some of the riders when they believed fog had descended onto the circuit and their lap times slowed, putting the record in jeopardy. It hadn't, they were dazzled by the stroboscopic effect of lights used to illuminate the bends of the Montlerey circuit in France as you passed them at speed.
Bertie's wartime experience flying enabled him to overcome the effect.
The poster released at the time says it all..... 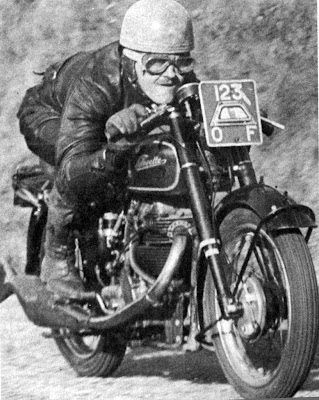 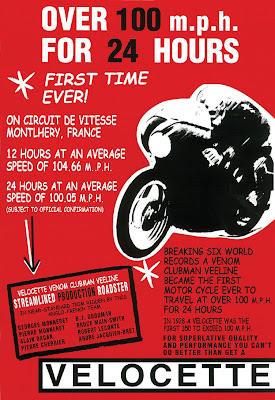 Posted by The Velobanjogent at 2:10 PM

Hello Dennis. Do you know if the 125cc motor still exists? It would be fun to finish the machining and assembly, then test the motor on a dyno. Or maybe even mount it in a period chassis... !

Pete, the 125cc engine was never completed and so as parts seemed to have disappeared.
I haven't heard of where it is today....
Dennis.

Seymour lived in Thame, near Oxford, my brother moved there and spotted his workshop and stopped-off for a chat, being an MOV-fan of old, had many a chat with him. Like the other Velo-specialists who did great work Seymour wasn't keen on the Goodman's anymore, as, with the others, he realised they had just been used ...and not paid for it either! He's dead years ago now, the shop disappeared, what couldn't be sold-off was probably scrapped by people who didn't know what it was.

Engine looks good, but, why-oh-why do they insist with the stupid shaft-drive! Complicated, expensive, more weight, rotten handling. Money was the problem, they didn't have any to waste, and as such, had no chance against MV anyway, so why bother. Better do as Ethel Denley told me, spend it on the 350 parallel-twin based on V8 car technology, designed by a relative in Detroit to slot into the LE, instead of the crap sidevalve-boxer which had no future even when new and expensive and unreliable to boot. The Yank engine was anvil simple and cheap to make, with bags of potential left. I'd love to get hold of the drawings he showed her and make one, just to prove a point.