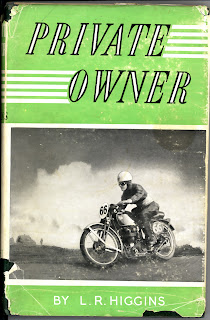 of KTTs amongst other things.
It is the insight into the racing career of a private owner, a rider who really never quite made the top ranks in the sport, but who in essence are the “backbone” of the sport, for without them filling the grids at the myriad of meetings around the world, there would be no motorcycle racing.
Apart from his own experiences, Higgins writes about the other riders of the major race meetings of his time with details of each race meeting,with lap times, some photos and who won what.
It certainly compliments the few other books written of the era, results wise.
Les Higgins wrote the book and it was published in 1948 by G.T.Foulis & Co. Ltd, of London, UK.
As he relates….”This is not the story of the successes of a works rider but that of a private owner, who went a racing for the sheer joy of it.”
He was a schoolboy in 1924 and first saw motor racing along the promenade during the Herne Bay speed trials- bitten by the bug, he purchased , in 1929, a new OHC Velo to ride on the road and plan his entry into racing. He purchased used racers during the 1930s ...a KTT Mk.4 and then a Mk.5, supporting his “habit” from his weekly pay packet of 57 shillings and finally bought a new Mk.7 KTT in 1938, although this meant he had to enter the IOM TT to gain delivery of the bike, something he hadn’t planned and he was dubious over it.
He raced, largely without major success but eventually obtained some support from a motorcycle dealer in 1947, one George Bryant known as “the Rider Agent”.
What happened to Les? I wrote enquiring of him in 1972 and his son replied to the effect that he was killed in a car accident around this time, returning from one of his several trips to northern Scotland to study bird life, another of his passions.
He also wrote several other motorcycle oriented books, and "Britains Racing Motorcycles" is one of them, also published by Foulis in 1952.
Quite hard to obtain and expect to pay around £25 ( around A$70) for a copy and it probably won't have the dust cover as illustrated.
Occasionally I see them offered on Ebay.
Les is pictured on his Mk.7 KTT, although this is at the 1939 IOM TT races in which he finished 29th in the Junior TT at 73.39mph average speed, with a fastest lap of 30m 12s.
Glancing through the ACU Stewards report of the race reveals he won a bronze replica and £20.... to get this the report says....
"To the entrant of every motorcycle other than the first six to be placed, that completes the course outside 9-8ths but within 6-5ths of the winners time: A Bronze Replica of the Tourist Trophy and £20"
The print is an S.R.Keig print code..1939/A9.... I believe Bill Snelling in the IOM, trading as Amuree publications, email amulree@mcb.net. has the rights to S.R.Keig's photographic archives.
Talking of these archives...when in the IOM for the TT in 1974, I haunted S.R.Keig's shop in Circular Road, Douglas...they let me look at all their glass plate negatives, using these up to about 1939. They were well organised, but little known, although they had a catalogue of their negatives from which I had copies made of all the Velocettes up to about 1951.....
Gold dust now.....
The other shows Les , again in 1939 from a small sepia print I acquired years back and judging by his leather coat blown open, it was quite windy...
Left click on images to enlarge....
Posted by The Velobanjogent at 10:02 PM