The Final Days of Velocette….

During the last three years of the life of Veloce Ltd.,

the various financial factors necessary for efficient production all deteriorated.
The situation was graver, however, than an analysis of balance sheet ratios indicated. The motorcycle market in the UK had declined annually since 1960, whilst the production of the British industry had fallen by over 50% during the same period.
During the period from 1951 to 1960 output of the single cylinder Velocette machines was between 1000 and 2ooo a year, in the period 1961 to 1970 it was in the hundreds per year falling in the last two years to 320 then 175 in the year. 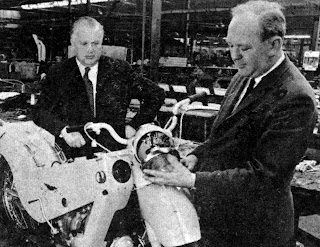 It appears Veloce production capacity was grossly underutilized. Attempts to replace the declining motor cycle production with other products proved unsuccessful.
Existing orders could not be manufactured on schedule because creditors were refusing to deliver materials until their accounts had been settled.
The empty workshops led to low morale, and low morale resulted in poor workmanship.
Overheads were spread over totally inadequate production whilst Direct Labour cost, artificially inflated by bonuses to retain the labour force, escalated to unacceptable levels. The return on the Enfield spares investment was excellent but it 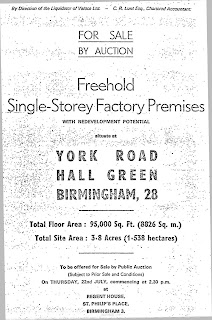 could only decline as more Royal Enfield motor cycles reached the end of their economic lives and were consequently scrapped.
On February 3rd 1971 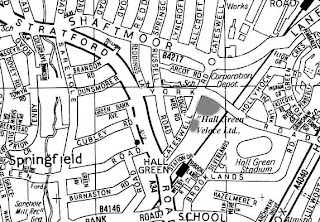 a creditors meeting was convened and inevitably the meeting passed a resolution to wind up Veloce Ltd.. The meeting appointed Mr. C.R. Lunt of Whinney Murray and Co., Newhall Street, Birmingham, UK, as liquidator. Mr. Lunt wasted little time; by 27th February 1971 the factory was advertised for sale.
Early efforts at disposal were unsuccessful and it was later sold for £127,000.
The balance sheet of the liquidator shows that after the discharge of debentures, payments to preferential creditors and payment of 84p in the £ to the unsecured creditors the ordinary shareholders, namely the Goodman family & those close by, received nothing.
The main item contributing to this situation was the expected loss, in the region of £130,000, on plant, machinery, stock and work in progress. This was the difference between the sale of the assets of a going concern and the sale of surplus equipment.
Liquidation terminated the life span of a firm that had ranked in spite of its small size, amongst the leaders of the industry. 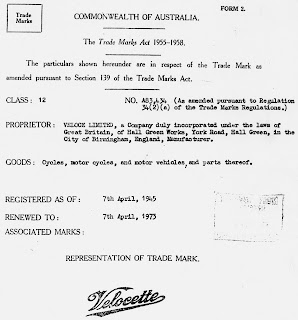 Pictured is the factory in the mid 1950s and the factory when is was being demolished on 14 June 1972.
Another with Peter Goodman with the last LE off the production line.
The Velocette trade mark was registered for use in Australia from 7th April 1945 to 7th April 1973 and a stamped notation, not clearly visible, says it was removed from the register in 1974, Veloce Ltd and consequently Velocette was no more…
Acknowledgement is made to Dr.Joseph W.E.Kelly from whose thesis for a Doctor of Philosophy degree in 1973 I have quoted from and to Temple Press for some photographs.
Left click on photos to enlarge.
Posted by The Velobanjogent at 11:48 AM

Email ThisBlogThis!Share to TwitterShare to FacebookShare to Pinterest
Labels: Motorcycle