I’ve owned several specials…motorcycle specials and Velocette ‘s in particular in my motorcycling career and these are two that come to mind and which I have photographs of.
But before we go on, what is a special?
I guess I’ll define it as a motorcycle made up of components that were not constructed together when the motorcycle was first built, in my case, in the Velocette factory. In Australia we could term this “ a bastard”…….
Pictured in the pits at Amaroo Park raceway around 1977, with reverse cone megaphoned exhaust. I often switched between a straight pipe and a megaphone.

The first was a Velocette racer…unsure of the exact date I got it from a previous owner, Dave Potts, who at the time was working for the Jaguar car distributorship, Bryson Motors , in their workshop.
I would have acquired it likely in the late 1970s and recall Dave telling me it won the 350 class of the NSW Hill Climb championships at Foley’s Hill, near Ingleside and that he also rode it at Mt. Druitt circuit, west of Sydney.
Bill Purnell was believed to have had the frame made for him, possibly in 1954. It was sold on to Leo Schemello who raced it at Mt. Druitt and Bathurst , NSW. He was reputed to “…have either won or was highly placed in the Clubmans events at Bathurst…”.
Tony 'Ace' Hatton aboard the MAC at Bathurst 1978, I rode my Mk.8 KTT.
The frame was made in Sydney by Stan “Nugge” Smith, one of likely only 20 or so he made, mostly for Velocettes, and was a copy of the frame made in the UK by Doug St. Julian Beasley…more commonly known as Doug Beasley.
This came about by Sid Willis, the well known Australian 250cc racer, famous for his racing Velocettes, usually ex-works stuff.
Sid was of small statue, under 5’ tall and “…less than 8 stone weight wringing wet…”, the perfect lightweight rider…
Sid went overseas in 1953 with Tony McAlpine to ride in the IOM TT and various Continental races meeting. He took a rigid framed 250cc DOHC Velo racer, with a cylinder head and cam box from the 1936 factory Velocette racing effort.
After a meeting in Europe it became painfully obvious his bike was quick , but didn’t handle well on the cobble stone circuits then common at that time. Arriving in England, he visited Doug Beasley and a frame was made for him and he “debuted” it in the Lightweight 250cc TT in IOM.
Sid did about 5 practice laps in all and in the race finished 5th, the first privateer behind factory runners.
Towards the end of the European tour he and Tony entered for a hill climb in Freiberg, Germany. Sid crashed heavily and bent the frame. On his return to Sydney, he visited “Nugge”, who built a jig off the frame, then ( to Sid’s dismay) cut up the frame to see the tube thicknesses and construction. The first frame off the jig went to Sid and still exists in NSW today. “Nugge” never numbered the frames, so the exact number made and where mine was in the sequence remain a mystery.
The front forks are from an LE Velo, with MAC Velo dampers inside. The engine is basically a MAC, with a special cylinder head, cast in “Y” alloy aluminium , by Sid, for Ted Carey ( another 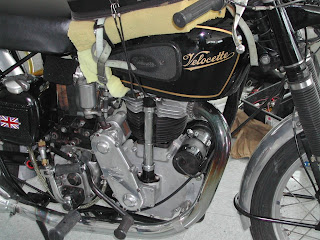 well known Australian tuner, who built his own DOHC based MOV in 1948…this for a later blog…)…the so called “Carey Head”. Again a small number were cast, but how many also is unknown, however four different ones have passed through my hands.
It was a light little racer…I weighed it, with an alloy rims front and back it was 265lbs. The engine was 11.5:1 comp. ratio on Methanol and quite successful in the latter day historic racing. MACs on “fuel” really “jump” out of corners and are hard to beat on twisty shorter circuits. On longer circuits OHC/DOHC engined racers tend to run them down. 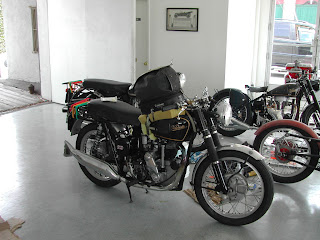 I took it over to the second Pukekohe Classic races in NZ in 1981, set up as a 250cc MOV.
It still races in the hands of it’s current owner, Sydneysider Colin Pitcher.
The other special pictured is a bike I still own and resides in the Los Angeles area of California. Built in about 1975 by a Canadian, the late Harry Muckalt in the Vancouver, B.C area, it passed into my hands in the late 1990s and has been used by me on numerous North American Velo OC Nat. Rallies and rides. In fact I rode it at the 2008 US VOC Spring Opener in May.
Based on a 1960 Velo scrambler frame, with 1948 KSS Mk.2 engine with Amal 10TT9 carb. and "TT" ratio gearbox ( that is it had KTT mk.8 internal gear ratios), MAC petrol tank and Velo Thruxton front and rear wheels it is “ a nice bit of kit” as Sam Jowett, Canadian US VOC member is won't to say…I really enjoy riding it.
DQ pictured "fettling" the KSS special at the 2005 US Centenary Velocette Rally.

Left click on images to enlarge.
Posted by The Velobanjogent at 4:44 PM