Don Cox, motorcyclist and latterly author has released details of his latest book "Circus Life", Australian Motorcycle Racers in Europe in the 1950's........ 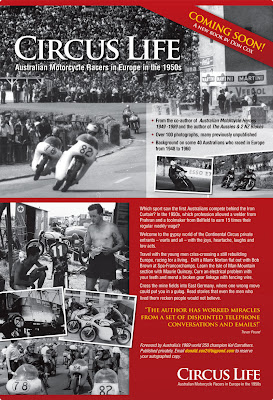 This project began in 2005 and the last chapter was finished in February 2010. (This is while maintaining a full-time day job and having my walking range tail away due to multiple sclerosis.) One reason it took so long was the flavour and scope evolved from a book about a handful of key characters to attempting to shine a light on some 40 riders who ventured to Europe between 1948 and 1960.
It might be the last chance to talk to some of these guys, so I felt compelled to recount their stories. I'm very sad that some key sources haven't lived to see the finished book -- including former racers Bob Mitchell, Bob West, Allen Burt and Jack Findlay.
I was fortunate two decades ago to have talked to Eric and Ruby McPherson, and George Morrison, about their Continental Circus experiences in 1949-50 and to Tom Phillis' parents Tom and Elsie.
Australian Motorcycle Heroes 1949-1989 was an obvious starting point. I had some chapters that didn't make the finished version in 1988. But I re-interviewed many of the characters and tracked down many more -- so this book goes much deeper into the 1950s than "Heroes". It picks up on aspects some reviewers identified as missing from the 1988 effort,
including the economics of 1950s racing in Europe. But it also attempts to show the diverse characters involved and tell the sometimes extraordinary stories.
The focus is very much on the private entrants and their way of life -- riding non-championship Continental Circus internationals week-in,week-out.
In addition, there are several chapters on the experience of racing behind the Iron Curtain. There are also more "side" players, including one of the two women who travelled with Bob Brown in 1955 after Allen Burt was seriously injured at the Isle of Man.
The internet has made research faster than 1988 in some ways -- there are more results and more photos available, even websites devoted to old circuits. Thanks to email you can often have a question answered in 24 hours. But the people are now 20 years older.
One of the first research activities was approaching the FIM for copies of the race calendars -- so I had the actual dates for the non-championship meetings. This made it easier to trace a rider's path across Europe and appreciate the distances from race to race.
In 2006 I visited a couple of the old circuits, most notably St Wendel -- a meeting the 1950s private entrants all enjoyed. One restaurant in the town has a wall dedicated to the races. The metal sign for the start/finish line stands in the front of the house where race director August Balthasar lived.
The next three years were devoted to research and writing -- with momentum often maintained by the thrill of the chase... Finding the tale behind a particular result, poring through a diary, unearthing the photo of a forgotten machine or just hearing the enthusiasm in a voice when you take a chance on a telephone number.

From the co-author of Australian Motorcycle Heroes 1949-1989 and the author of The Aussies & 2 NZ Blokes
Foreword by Australia’s 1969 world 250 champion Kel Carruthers
Over 100 photographs, many previously unpublished
Background on some 40 Australians who raced in Europe from 1948 to 1960

The Story:
Which sport saw the first Australians compete behind the Iron Curtain? In the 1950s, which profession allowed a welder from Prahran and a toolmaker from Belfield to earn 15 times their regular weekly wage?
Welcome to the gypsy world of the Continental Circus private entrants – warts and all -- with the joys, camaraderie, heartache, laughs and low acts. It was a time when rider usually had to be truck driver, mechanic, cook and start-money negotiator as well. And management help? You wish! In the 1950s it was considered un-Australian to push your own barrow.
Travel with the young men criss-crossing a still rebuilding Europe, racing for a living – some with their mates, others just married. Drift a Manx Norton flat out with Bob Brown at Spa-Francorchamps. Learn the Isle of Man Mountain section with Maurie Quincey. Take on race organisers over starting money with Jack Ahearn and Keith Campbell. Cure an electrical problem with your teeth and mend a broken gear linkage with fencing wire. Cross the mine fields into East Germany, where one wrong move could put you in a gulag. Experience the highs, lows and scary hospitals – stories even the men who lived them reckon people would not believe.
The fruits of five years’ research, Circus Life goes deeper than the typical “who won what and when”. The author puts you on the grid at Villefranche des Rouergue; in the van trundling across Europe in high summer and behind the Iron Curtain on the oil-stained public roads of Brno.
“The author has worked miracles from a set of disjointed telephone conversations and emails!” -- Trevor Pound
Don is awaiting the first printed copies and envisages the price to be in the AUD$75 range plus postage from him direct or from specialist bookshops.When the book becomes available, I'll run another blog with firm details.
I've searched through my files for a pic or two of some of the riders to be featured....
Outside "Rose Villa" the favourite guest-house haunt of Aussies in Douglas IOM, L to R.
Alan Burt, Ritchie Thomsen, Bob Brown, Maurie Quincey's wife, Maurie Quincey. 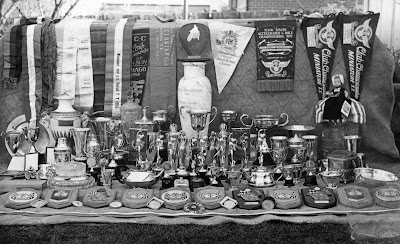 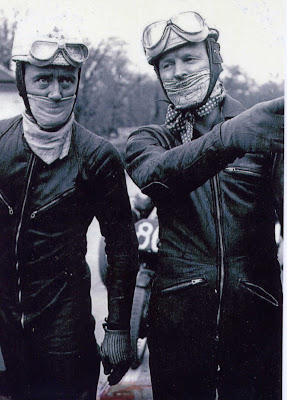 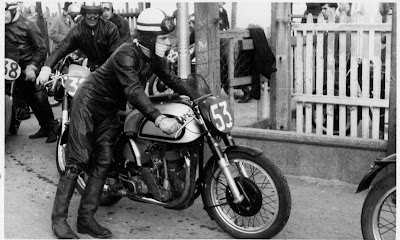 Keith Bryen on the podium after winning the 350cc race at  Norisring, 21.07.1957. Eric Hinton to the right.
( last five photos courtesy of Keith and Gwen Bryen )

Posted by The Velobanjogent at 4:26 PM