Earlier I started information on the Motometer instruments used on BMW motorcycles, and this is to be continued, as I have yet to cover the BMW K100  and K75 series and the BMW/6 and /7 series.
But this blog deals a bit more technically with problems that arise with the BMWR80GS and a start on the BMW/6 and /7.
Left click on the images to enlarge.....
I had a comment from a chap, "Peter G" who looked at the R80GS blog and I recalled then a common problem that occured with this instrument.
The area where the cable attaches to, and this thread is 18mm x 1.5mm metric, is what we call the lower frame and originally it was supplied as a plastic item..who knows why, but cost is a likely consideration.
With time and heat, the material seemes to change and as the section where the threaded part changes into the main top part of this frame is thin, vibration and road shock would snap it off.
A "quick fix" was to use Araldite or and adhesive, but it seems to not be a permanant repair.
I knew that the frame on the previous BMW/5 models used a diecast metal frame and it was identical, so I used them, but soon ran out of used items.
On a visit to Motometer I enquired as to parts for the BMW/5 intending to purchase these metal frames.
Parts for this model were no longer available, although Motometer admitted to making small batches of the complete instrument for BMW as a spare part.
During the inevitable tour of the factory I noted a pile of these diecast frames and observed the Motometer part number which I quickly wrote down.
Later in Sydney, assembling an order of parts for the later BMW speedos, I included this diecast frame number with a quantity of 100...
I was pleasantly surprised when 6 months later the order arrived and those diecast frames were supplied...Eureka!
I did this a second time before they ceased supply and I note, although I sold all my Motometer parts when I sort of retired to Lionel Otto Instruments in Salisbury, Brisbane, Queensland, I kept three and still have them.
Yes I'll sell them ...email me. 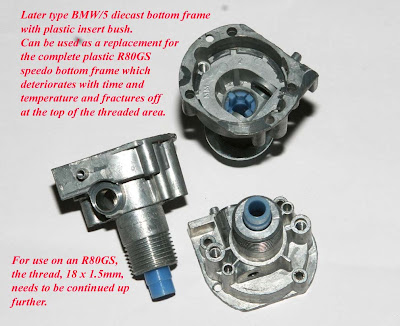 As you can see you need to run the thread further up the diecast frame, as there is a large flat washer and thin nut to secure the speedo into the case.﻿
Another problem that occurs is the bottom of the speedcup shaft which pivots in a bush at the end of the mainshaft where the magnet assembly presses on. This is the same for the GS or the /5/6/7 series instruments.
The end often fractures off, in which case you need to find a supplier of these shafts, or if you've access to a small instrument lathe, Lorch , Emco etc, machine one up out of silver steel.
As well even if they don't fracture they wear...you can feel the wear with the end of your finger..it feels sharp.
Measure the length that this end protrudes from the speedcup bell from the brass centre piece to the end. The range 0.125" -0.140" is what you want and if at the lower end or less, you need to make a locating jig and lightly tap the shaft through. 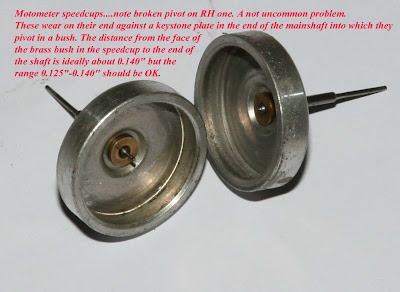 The magnet is secured to the mainshaft by lightly pressing onto the shaft and trapping a plastic keyplate. Wear occurs on this plastic keyplates bearing surface and so you need to reduce this such that there is minimal play.
Care when pressing the magnet on...make a small pressing piece to push on the brass centre of the magnet to avoid cracking the magnet. DONT tap with a hammer. 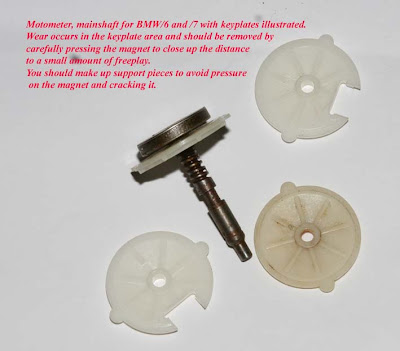 It's also possible for the small bush at the top of the mainshaft to wear and it has a small circular hardened piece of steel inder it, called an endplate, which the speedcup shaft mentioned above pivots on.
Re-bushing this is not impossible, but tricky. You need access to a small instrument lathe, a clockmakers Lorch or an Emco 3. You can buy small bushes from clockmaking suppliers, brands such as Bergeon. They are not expensive less than AUD$2 here in Australia and you certainly couldn't machine them up for that.
As well the small threaded top bush...4mm x 0.35mm thread which the speedcup shaft passes through can wear and again a Bergeon bush can effect a repair.
I was able to buy the threaded bushes from Motometer years back. 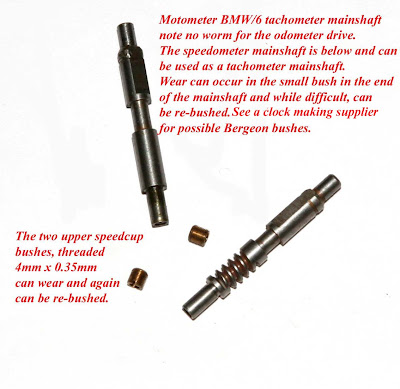 On the BMW/6 and /7, the mainshaft runs in what looks like a threaded guide, initially brass on the /6, then plastic on the /7. The plastic ones can be used on the /6, but you need to file off the locating webs on the outside.
The mainshaft like most of the steel parts in speedometers are unplated metal and thus rust. The rust on the mainshaft causes a squealing noise in operation and cleaning off the rust and regreasing it cures this problem. 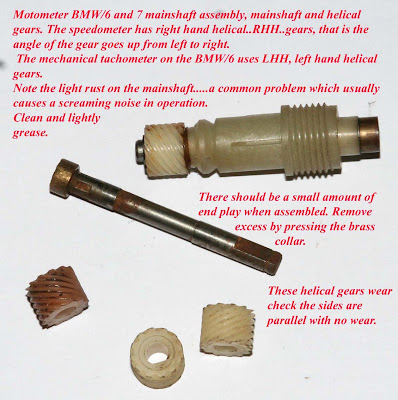 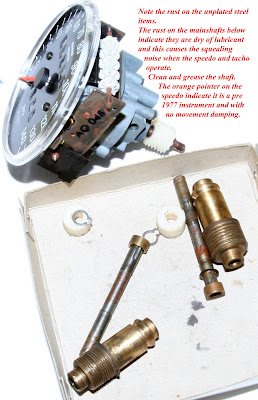 The later /7 instruments had a damping bridge and cup arrangement with silicon damping fluid as the medium and reduced the tremor of the pointer in operation.
However pointer trembling or oscillation can also be as a result of an inner drive cable fault....another blog for the future, the care of speedometer cables...or wear in the top and bottom speedcup bushes as well as no damping medium. 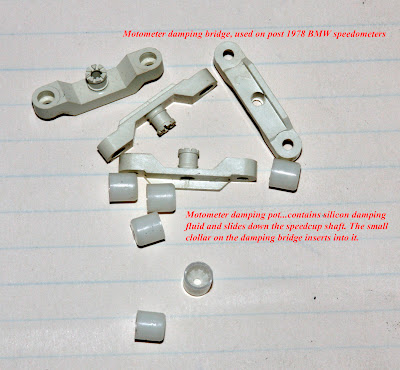 Detail of the speedcup shaft bottom pivot length. This wears on the end stone in the bush at the top of the mainshaft and the inside of the aluminium speedcup "poles" on the magnet, eventually destroying it.
You can lightly stone the worn end of the shaft and then tap it though the brass piece in the speedcup to the correct setting...0.140" protruding. 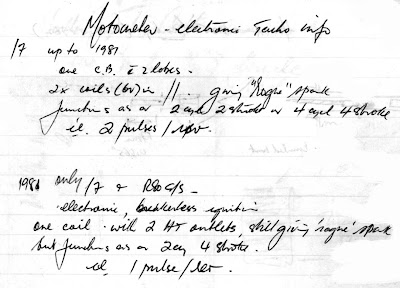 Posted by The Velobanjogent at 4:15 PM

Email ThisBlogThis!Share to TwitterShare to FacebookShare to Pinterest
Labels: Motometer